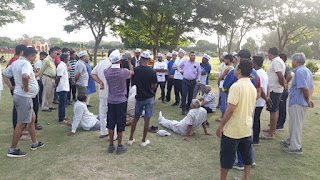 By Tricitynews
Chandigarh 03rd May:- Aam Aadmi Party candidate Harmohan Dhawan continued his door to door campaign in village Butrela. Dhawan was accompanied by Jhujhar Singh Badheri, Jasbir Singh Butrela, Jarnail Singh, Deedar Singh, Mohinder Singh,Kulwant Singh, Girvar Singh. During the campaign Hundreds of villagers came out of their homes and gave blessings to Dhawan for winning the forthcoming Loksabha elections. The villagers said due to Bansal & Kher the villages are in worse condition. At the time of   merger of Panchayat in Municipal Corporation, Pawan Bansal had assured them that there will be total development of   the village and no tax will be imposed. But After the merger, development became a distant dream. Inspite of assurance new taxes have been imposed. The conditions of roads, the sanitation, electricity & water supply is in bad shape. Villagers also said that this time they   will reject both Bansal & Kher in the elections.
While addressing the Butrela residents AAP Candidate Harmohan Dhawan said that Bansal & Kher both are responsible for destroying the identity of the Villages. Harmohan Dhawan further assured that houses built outside Lal Dora will be regularized. He further said the Pumjabi & Hindi will be given official recognisation in the Chandigarh Administration.
Satinder Dhawan continued her door to door campaign for AAP candidate Harmohan Dhawan in Sector 23. The residents assured their vote and support to Aam Aadmi Party Candidate Harmohan Dhawan.
In the early morning Bikram Dhawan along with AAP Yuva brigade visited Shivalik Park Manimajra & interacted with hundreds of morning walkers & they were assured of their vote & Support.

Posted by tricitynews online at 04:26