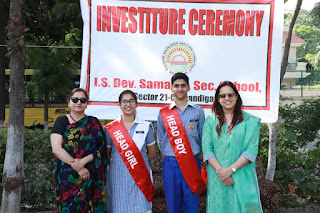 By Tricitynews
Chandigarh 09th July:- The eagerly awaited ‘Investiture Ceremony’ of students’ council for the academic session 2019-20 was held at I S Dev Samaj Senior Secondary School, Sec 21, Chandigarh.
In a ceremony which was held with full enthusiasm, students were explained the meaning and importance of Investiture Ceremony. New members of the newly elected council were announced.
Pawan was made Head Boy, Kanupriya Head Girl, Sandeep was introduced as Junior Head Boy and Tanvi as Junior Head Girl.  Adit became Junior vice Head Boy and Gunhpreet Junior vice Head Girl.
4 House Captains, 18 Council members and prefects from each class were also introduced.
The elected students were presented badges and sashes by Principal Loveleen Bedi and Chief Coordinator Sabeeha Dhillon Mangat.  The Principal also explained the role and responsibilities of the elected students to them. The ceremony concluded by the address of the Chief Coordinator who congratulated the students with an advice to balance well, these opportunities with academics, and excel in both.

Posted by tricitynews online at 04:57