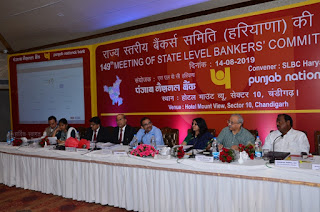 By Tricitynews
Chandigarh 14th Aug:- The 149th meeting of State Level Bankers’ Committee Haryana was held today at Hotel Mount View, Sector 10, Chandigarh. TVSN Prasad, Additional Chief Secretary to Govt. of Haryana, Finance & Planning Deptt was the Chief Guest of the Meeting. Dr Rajesh Yaduvanshi, Executive Director, Punjab National Bank presided over the meeting. Sunil Gulati, Animal Husbandry and Dairying Deptt., Haryana, Dhanpat Singh,Housing Department, Haryana, Anand Mohan Sharan, Principal Secretary, Urban Local Bodies Deptt., Haryana, Madam Bhawna Garg, Dy. Director General, UIDAI, Ms. Amna Tasneem, Managing Director, HSFDC, Ms Rachna Dikshit, Regional Director, Reserve Bank of India, Chandigarh, Shri Deepak Manchanda, CGM, NABARD, Regional Office, Haryana, D K Jain, Zonal Manager, Punjab National Bank, Haryana Zone & Convener, State Level Bankers’ Committee, Haryana,  Senior Officers of the State Govt. and Controlling Heads of the Banks operating in the State of Haryana were among those who attended the meeting.
Dr Rajesh Yaduvanshi, Executive Director, Punjab National Bank in his key note address informed that since launch of Pradhan Mantri Jan-Dhan Yojana (PMJDY) on 28th August, 2014, banks have opened 71,25,433 accounts up to 30th June 2019 and garnered an amount of Rs 2,749 crore as deposit under this scheme.  Out of total 32,66,593 accounts of women have been opened which is 46% of the total accounts opened and Rupay Cards have been issued in 90% of the total accounts opened.
While informing the house about the progress made by banks in 3 Social Security Schemes namely Pradhan Mantri Suraksha Bima Yojana (PMSBY) for accidental death insurance, Pradhan Mantri Jeevan Jyoti Bima Yojana (PMJJBY) for life insurance cover and Atal Pension Yojana (APY) for old age pension,  Dr Yaduvanshi informed that under PMSBY the banks have enrolled 32,41,016 persons, under PMJJBY enrolled 9,75,779 persons and  in Atal Pension Yojana (APY) enrolled 3,13,000 persons upto 30th June, 2019.  He called upon the bankers and the officials from respective insurance companies to accelerate their efforts to extend the benefits of the scheme to a large number of masses in the State.
While speaking on Pradhan Mantri MUDRA Yojana, Dr Yaduvanshi said that Pradhan Mantri MUDRA Yojana was launched to “fund the un-funded” by bringing such enterprises to the formal financial system and to extend affordable credit to them.  He informed that under MUDRA loans as on 30th June 2019 the banking system in Haryana has disbursed an amount of Rs. 10,537 Crore since inception of the scheme.
Dr. Yaduvanshi informed the house that in the interim Budget 2019-20, the Union Govt announced their decision to extend the facility of Kisan Credit Card (KCC) to Animal Husbandry & Fisheries to help them meeting working capital requirements.  In pursuance of the said Budget announcement, Reserve Bank of India in its Notification dated February 03, 2019, has framed guidelines for extending the KCC facility for working capital requirements for activities related to animal husbandry & fisheries.  In accordance with the guidelines of RBI, the Scale of Finance shall be fixed by District Level Technical Committee (DLTC) based on local cost worked out on the basis of per acre/per unit/per animal/per bird etc.  In Haryana, District Level Technical Committee meetings in all the districts have been held in coordination with SLBC Haryana and HARCO Bank.  This step for issuing a new and separate KCC for Animal Husbandry & Fisheries will be game changer specially for boosting milk production in the State of Haryana where-in per capita milk availability is second highest in the country and love for milk is inherent custom and tradition of the people of Haryana.  This will prove to be a realistic measure to double the income of farmers by 2022 as envisaged by our Hon’ble Prime Minister.  This will contribute to good asset creation of the farmers which is demand of time for constant and sustainable increase in income of the farmers.
While reviewing the performance of the banks for the review period from June 2018 to June 2019 under various key parameters, Dr Yaduvanshi informed that the Banking System in the State achieved all the National Goals during period under review.  He informed that the Commercial Banks and RRBs opened 78 New Branches during review period thus raising the total number of branches to 4806.  The Total Deposits of Commercial Banks/RRBs increased to Rs. 3,91,840 Crore as at June 2019 from Rs.3,48,107 crore as at June, 2018 thus showing an increase of Rs.43,733 Crore or 13%.
The Total Advances during the review period increased to Rs. 2,58,806 Crore registering a growth of Rs.24,537 Crore. Priority Sector Advances gone up from Rs.1,31,287 crore to Rs. 1,40,523 Crore recording an increase of Rs.9,236 or 7% during the review period.  Priority Sector Advances to total advances in the State as on June 2019 stands at 60% as against National Goal of 40%.  Agriculture Advances increased from Rs.48,401 Crore to Rs.50,636 Crore exhibiting a growth of Rs.2,235 Crore or 5% during the review period.  The ratio of Agriculture Advances to total advances was 22% as against National Goal of 18%. Overall CD Ratio as on June 2019 for State as a whole was 66% against National Goal of 60%.
While informing about the “Stand Up India” Programme launched by Hon’ble Prime Minister of India on 5th April 2016, Dr Yaduvanshi informed that since inception of the scheme Banks in Haryana have given loan under Stand Up India to 3416 beneficiaries amounting to Rs 694 crore.
The overall achievement of banks under Annual Credit Plan 2019-20 upto June, 2019 was 109%. The achievement under Agriculture, MSME and Other Priority Sector was 99%, 157% and 67% respectively.
He laid focus on educating the borrowers about the timely repayment of bank dues. He also requested the State Govt. to help the banks in the early settlement of pending 22,929 Recovery Certificates filed under HACOMP Act involving an amount of Rs. 743 Crore pending as at June 2019. He requested the State Govt. to take necessary steps to improve the recovery as the recovery of advances is the urgent requirement of banks for re-cycling of funds and for viable banking operations.
Posted by tricitynews online at 02:51