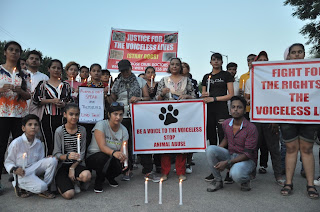 By Tricitynews
Chandigarh 29th August:- A large number of residents  held a candle march against the ill-treatment and sheer negligence of Veterinary Hospital Dog Sterilization Centre, Sector 38, Chandigarh, which took the lives of four stray dogs recently.
The group of people who participated in the march  included men, women and children. The march  started around 6 pm from sector 42 lake, passed Bhaskar Chowk and came back to culminate at the start point- at sector 42 lake.
The residents held banners and also raised slogans against the  Municipal Corporation for not taking any action against the culprits.
Simran, a social worker, who feeds the dogs on a daily basis at Sector 42 Lake said that she admitted 5 stray dogs at Dog Sterilization Center.  After few days when she went to the center to inquire about the well being of the dogs the staff members didn’t give her a positive response.
Simran further added that a few days later, she got to know that the dogs were found in a critical condition near Sec 42 lake. When she went to check there, she was shocked to see the condition of the dogs. The stitches of the two dogs were opened and organs were lying out of their stomach due to which they died later. And the rest two dogs died after being inflicted by infection. They were the same dogs, who were admitted by her at the Dog Sterilization Centre.
Malkit Singh, husband of Simran said that we have registered a complaint against the staff and doctors of Veterinary Hospital Dog Sterilization Centre with the sector 38, Police Station. And a complaint letter has also been forwarded to the Chandigarh Municipal Commissioner K.K Yadav, but to no avail.
He said that we only demand justice for the voiceless lives and that strict action should be taken against the unprofessional staff and doctors.
Posted by tricitynews online at 05:26