E-Cigarette Legislation is an “all bark no bite” Legislation: Diluted Under Industry Influence 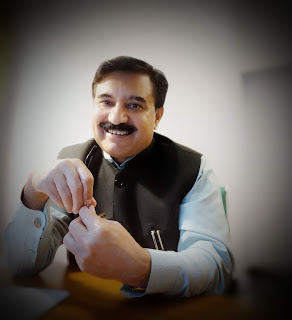 By Tricitynews
Chandigarh 29th November:- A city-based social activist who led a 12 years long battle to ban Nicotine containing articles, including E-Cigarettes, has criticised the Union government’s legislation on E-Cigarette which was introduced in the Rajya Sabha yesterday i.e. on November 28th 2019.
Activist Hemant Goswami, who is also the recipient of the 2013 WHO award for fighting tobacco, calls ‘The Prohibition of Electronic Cigarettes Bill 2019’ as an absolutely “diluted piece of legislation,” which fails to address the grave issue of Nicotine laced products. He said that it’s just an all bark no bite legislation, not worth the paper it’s printed on. It partially addresses only e-cigarettes, which is less than one percent of the real problem of Nicotine abuse. In the long run, it rather helps the tobacco industry.
Twelve years back, in 2007, a social activist from Chandigarh, Hemant Goswami filed a Public Interest Writ Petition (CWP 14597 of 2007) in Punjab and Haryana High Court demanding banning all forms of chemical Nicotine, as it was a deadly poison and it’s various forms like Sheesha/ Hookah, e-cigarettes, etc. were a grave danger to the public. After five years of legal fight, in 2012, the High Court finally passed its judgement admitting that Nicotine and all Nicotine delivery devices were poisons and the State must regulate the same. Thereafter, the States of Punjab, Haryana & Chandigarh added Nicotine in the list of Poison under the Poisons Act of 1919. The High Court also asked the States to constitute a permanent task force for monitoring of the abuse of Nicotine. The high court kept the writ alive, to date, for monitoring purposes.
Subsequent to the High Court order, in 2013 the Ministry of Health formed an expert committee with the petitioner Hemant Goswami and WHO officials as expert members. After deliberations for five years, in 2017, the legal group of the expert committee recommended that it is necessary and expedient in public interest to completely, without any exception, prohibit the import, manufacturing, distribution and sale of Nicotine as an extract and/or chemical, and Electronic Nicotine Delivery Devices.The new legislation brought by the Ministry completely removed the recommendation to prohibit the use of Nicotine as an extract and/or chemical.
Hemant Goswami alleged that the bureaucracy while drafting the new legislation has very narrowly constructed the definition of Nicotine Delivery Devices and has completely obliterated the recommendation to prohibit ‘Nicotine as an extract and/or chemical’ under extraneous pressure. Such piecemeal restriction of E-Cigarettes will only help the tobacco manufacturers and cigarette companies as it will eliminate the competition of cigarette companies, which they face from e-cigarettes, while allowing the use of Nicotine as an extract and/or chemical in other products.
Hemant Goswami added that the legislation is also toothless in taking any action as it restricts and binds the law enforcement agencies for taking prior permission for initiating any criminal or legal action against any violator. It provides for a penal punishment of upto one year without mentioning about the cognizance of the offence. Since Cr.P.C. provides that only those offences where there is a provision for less than three years of imprisonment, they shall be deemed to be non-cognizable, meaning thereby that the police can’t take direct cognizance of the offence. Section 5 of Cigarettes and Tobacco Prohibition Act also suffers from this lacuna.
He said that this legislation is such a let-down, after 12 years of my struggle, I feel cheated by this legislation.
A 5th September 2017 note of the meeting by the Ministry of Health read; “The Expert Group in its Report, has stated that the scientific evidences indicates that the use of Nicotine (and its compounds), whether through electronic devices commonly called Nicotine Delivery systems (ENDS) or through non-electronic device/apparatus is hazardous. The report also states that besides causing cancers and several other health disorders, Nicotine is also classified as poison and is fatal for human being even in very small doses. In the larger interest of public health' and as recommended by the Expert Group' the sale of or trade in nicotine (other than for therapeutic use approved and prescribed under Drugs & Cosmetic Act) or any device that enables its use is illegal and in violation of the existing laws. Violators are liable to be prosecuted.
Posted by tricitynews online at 05:31