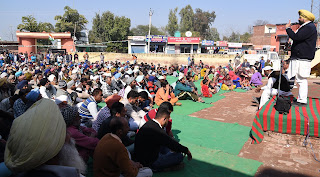 By Tricitynews Reporter
Chandigarh 01st February:- Balbir Sidhu the Congress candidate from Mohali has called upon the Mohali people to contribute towards development of Punjab by casting their votes for Congress. It is a high time for people to stand united to end all problems that Punjab are witnessing from the past decade of misrule.
He was addressing a huge group of villagers during his poll campaign at Saneta village near here today.  He said that vote a candidate whom you know from long time and not to them who are new in arena. My party has shown confidence in me by giving me responsibility to serve you again. Now it’s up to you to vote for the right choice like you did in last election.
Balbir Sidhu said that he reiterate again to continue to work for the development, dignity and prosperity of every citizen of Mohali if you give me another chance.
He said that Congress is an only hope for Punjab that can bring Punjab out of crisis that it is facing in the forms of drugs problems, farmers suicide and unemployment.   It is in fact golden opportunity for people to become a part of this change and contribute their part in building Punjab strong in coming time.
The Congress is going to form government in Punjab with thumping majority. Majority of pre-poll surveys have declared Congress front runner in race with no sight of SAD-BJP and AAP.
The pre-poll surveys indicate people mood in Punjab to give the reins in the able hands of Capt Amarinder Singh who with its sheer leadership will take Punjab on the top as far as all-around development is concerned.
Punjab people are badly fed up from the 10-yr rule of SAD-BJP and waiting February 4 to vote for Congress. Due to it anti people policies, SAD-BJP are themselves to blame for people anger towards them.
Balbir Sidhu said that moreover, Punjab people are now well aware of AAP false propaganda. The Punjab need leader like Capt Amarinder Singh and not like AAP leaders who can’t be trusted anymore. The Punjab is on the threshold of a new bright morning. It is a golden chance for you to vote for Congress for the beginning of a golden era in state in general and in Mohali particular.

Posted by tricitynews online at 04:01