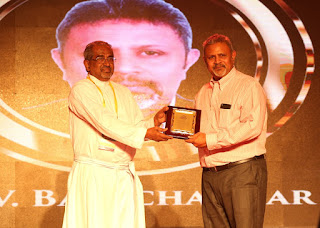 By Tricitynews Reporter
Chandigarh 05th October:- N.V. Balachandar, President - HR, Communication and CSR has been presented the ‘Illustrious Alumni’ award by his alma mater, the Loyola College, Chennai. The award was presented during the Loyola Annual Alumni Day celebrations which takes place annually on 2nd October. It is the most important activity organized by the Loyola Alumni Association. Sixteen living legends of education through Loyola - the Former Rectors, the Principals and Secretaries were present during the occasion to commemorate the special ceremony.
Presenting the award, Fr. Thomas Amirtham S.J., Director, Loyola College, Chennai, said that this year is very special for all of us associated with this legendary institution. Our college has being declared as the 2nd best College in India by National Institutional Ranking Framework (NIRF) of Ministry of Human Resource Development (MHRD) and we also celebrate the Centennial Year in 2025. The Loyola Alumni Association is proud to bestow the ‘Illustrious Alumni’ Award to N.V. Balachandar who has excelled in his vocation and lived as an example to our institution’s motto of Luceat Lux Vestra which means Let Your Light Shine. We wish him well and may he scale even greater heights.
Expressing his gratitude on receiving the award, N.V. Balachandar, President, HR, Communication and CSR, said that he is humbled and truly honored to receive this award from his alma mater. This is one of the most important milestones in his life and it is thrilling to be among the stalwarts who have been bestowed with this recognition. This further adds to my enthusiasm to continue on the path he has embarked on.
Including N.V. Balachandar, the Award in 2017 has been given to five stalwarts. Other four recipients of the awards are A. M. Swaminathan, former Chief Secretary of Tamil Nadu; Mano Selvanathan, successful and influential businessman from Sri Lanka; Ravindran, International President of Rotary International and Ramakrishnan, CFO of TCS.

Posted by tricitynews online at 05:14