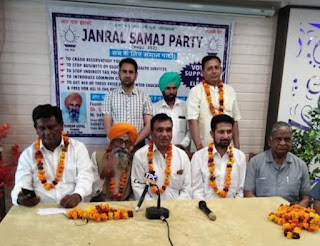 By Tricitynews
Chandigarh 04th April, 2019:- Janral Samaj Party has declared Satish Kumar as its candidate from Chandigarh Party founder president Suresh Goyal, told the media persons here today.. The main agenda of the party is to fight the rights of the general public.
Party is in continuous battle against reservation, senior leader Rajkumar Sharma said that in the last few years, fighting against the caste reservation is being fought by the general category people in the courts. But due to the wrong policies of political parties, casteism is increasing in society.
He said that during the last period, the people of General Society demonstrated their political power by suppressing the notes and now they have decided to cast their candidates in the field. He pointed out that the Central Government has fixed the limit of annual income of eight lakh rupees while giving reservation on economic basis to the people of the general category, whereas there is no such limit for the dalits.
This makes it clear that the gap between the two sections of society is being deepened to fulfill the political interests. On this occasion, JSP leaders gave a slogan to support caste-based society, while announcing the party's North Zone in-charge, Engineer Satish Kumar, as a candidate from the Chandigarh Lok Sabha constituency, that the Janral Samaj Party had visited the various colonies and sectors of the city feedback of current MP Kiran Kher is being taken.
Satish Kumar said that in the elections so far, it has often been seen that the people of general society help the electoral candidates with money and money, and later, the same leader, in order to bring the benefits of reservation to other castes talk about people's interests. He said that he is not opposed to giving reservation to the poor, but financially strong people should not get the benefit of reservation. People of Chandigarh have been regretting sending Kiran Kher into the Lok Sabha today. Therefore, the Janral Samaj Party has decided to go to Chandigarh's electoral battle. On this occasion, party leaders Jagmohan Krishna Thakur from Ludhiana's Sangrur Lok Sabha constituency, Mukesh Kumar from Ludhiana Lok Sabha seat have been, declared Lok Sabha candidates.
Party leaders said that they will soon be issuing their manifesto for the Chandigarh parliamentary seat. Several leaders from Gurdaspur including party leader Pritam Singh Bhatti, Rajindra Garg Bathinda, Mukesh Kumar Ludhiana, BLSP president Balwant Singh Khalsa were present on the occasion. Public has been disillusioned with all political parties on the issue of caste-based reservation, the people of General Society formed the Janral Samaj Party.JSP leaders said that in the coming days, the list of nominees will be issued in other seats of Punjab.