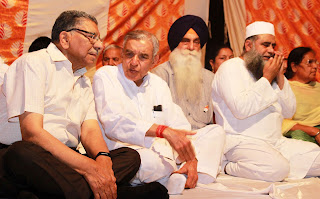 By Tricitynews
Chandigarh 23rd April:- It is the misfortune of the poor that Prime Minister Narender Modi and his government never thought about their welfare during the last five years .  Expressing these views at a public meeting organized by the minorities cell of Chandigarh Congress at Milk Colony, Dhanas on Monday night, party’s Lok Sabha candidate from Chandigarh Pawan Kumar Bansal said that Modi government did not launch any scheme or programme for the poor, where as Congress President Rahul Gandhi had recently announced that on the party coming to power it will implement a scheme granting Rs 72,000 per annum to each BPL family to uplift their lot.
The former Union minister reminded the gathering that the BJP was famous for making false promises to misguide the public which it knew it could not fulfill. He asked that what happened to the two crore new jobs which it had promised to create annually.
Similarly, in Chandigarh the BJP thoughtlessly neglected a public demand for decongesting traffic congestion and got the much needed metro project started by the Congress scuttled. Local municipal councilor Sheela Phool Singh also addressed the gathering.
Posted by tricitynews online at 05:29