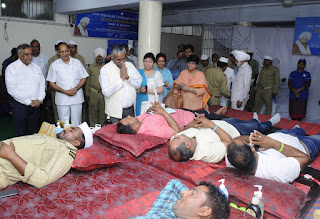 By Tricitynews
Chandigarh 24th April:- Scientists have been successful in replicating  of all human organs, but blood is such a part of the human body that nobody on earth has been able to replicate, due to which a living being’s requirement of blood, can be met only by blood donation, said Parminder Rai (I.P.S Retd. Haryana Police), here today at the Sant Nirankari Satsang Bhawan, Sector 30-A, at the blood donation camp organized on the occasion of Manav Ekta Divas. In this Camp Total 483 donor including 61 Ladies donated the blood.
Commending the thousands of devotees and motivating them toward the noble cause, Parminder Rai further said that you may not know who received the blood donated by you, but there is certainty of the fact that because you have the God-knowledge, and values of humanity running through your veins, whoever receives this blood will not only get a second chance at life, but also receive the human virtues of love, benevolence and patience.
On this occasion, Zonal Incharge K.K Kashyap said that as per the directive of Satguru Mata Sudiksha Ji Maharaj and the preaching of Baba Hardev Singh Ji Maharaj that blood should flow in veins, not in drains Sant Nirankari Mandal organized total 81 blood donation camps in various branches all over the country on this day.
K K Kashyap also mentioned that inspired by the preaching of Baba Hardev Singh Ji Maharaj, an increasing number of devotees have been taking an initiative for this noble cause since 1986. Till date, the Mission has organized 6,076 blood donation camps and collected over 10 lakh units of blood. Out of this, 516 camps were organized last year, to collect 84,058 units of blood. In Chandigarh zone alone, 22 camps were organized last year, and in the year 2019-2020, an estimated 30 blood donation camps will be organized in this region.
C.S Tour, Coordinator, North India Branch, Publication Vibhag, said that on this day, Satguru Baba Gurbachan Singh Ji Maharaj was martyred for the welfare of humanity, along with Chacha Pratap Singh Ji. And it is pertinent that we do not forget the sacrifices of the great gurus, and adherence to their preaching will be a true tribute to them.
Sanyojak Navneet Pathak, who was also present on this occasion, expressed his gratitude to Dr. Suchet Sachdev, Blood Bank P.G.I, Chandigarh, and Dr. Simranjit Kaur, G.M.C.H 16, along with their teams of paramedics. He also expressed his gratitude to all devotees who gathered here today to contribute this cause of welfare.

Posted by tricitynews online at 04:46