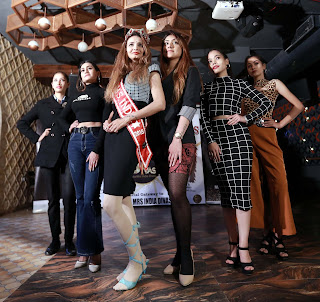 By Tricitynews
Chandigarh 09th December:- As many as 55 female models from Chandigarh and Punjab  took part in Divas Beauty Pageant’s auditions for Miss and Mrs. Punjab Divas on Sunday.
55 models between age groups of 21-33 years participated in auditions. The grand finale will be held in Goa in April next year.
Simrat Kaur, state director of Punjab Divas said that Miss and Mrs. Punjab Divas is one of the most prestigious beauty pageant for women of all ages. It’s a part of international beauty pageant which is an effort to acknowledge today's Indian women and will turn into a vehicle for self-awareness and advancement of social appreciation.
Binny Bhatt, founder of Divas Beauty Pageant and the winner of Mrs. India Earth Charity Ambassador 2017 & Ms. India Earth International 2018 was also present during occasion.
Meanwhile Divas pageant has several categories under which anyone from age group 3 to 45 can participate. The contestant who enters this prestigious pageant embarks a life changing journey.
Simrat Kaur informed that Divas creates ambassador to work for the society by creating awareness towards domestic violence, cancer awareness and women empowerment and save the child .Passionate winners are groomed and promoted to participate in International pageants to see the vast exposure and bring the change in oneself, she maintained.
The winners from Miss and Mrs Punjab Divas will represent Punjab in The Miss and Mrs India Divas Pageant in April 2020. Further the winners will represent India at Earth Pageant, United Nations Pageant, Asia Pacific Pageant, Eco International Pageant and many other pageants, said Binny Bhatt adding this will be an excellent opportunity for all the participants to represent themselves and to showcase their talent at Divas and World level platform.
Posted by tricitynews online at 03:47