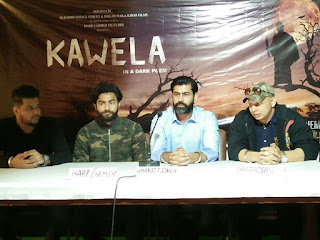 While interacting with media Amanjit singh Brar said that all the artists of the film from theatre department. The world wide famous name in photography Harp Farmer will be seen as lead star which is worth mentioning and the key attraction of the movie. He further said that it is neither romantic movie nor comedy like other Punjabi movies. This is an imaginary movie. Its music is quite different from other Punjabi movies, music is given by Gurmoh. Songs are from the pen of Sant Kabir ji, Dr Surjit Patar and himself.
Gagandeep Singh has worked as Director of Photography in the film who is famous DOP in Mumbai.
This is a psychological thriller Art movie. It is about People, Time, Punjab, and Present & Past, which all affects our future. It is a story of four days four nights. But it covers the whole lifetime of characters in such ways. To understand story we have to live the whole film, like whole team, every actor lived it.
KAWELA is being scheduled to worldwide release under the banner of Old Post Office Street Films, Dogar Wala Khoo Films and Harp Farmer Pictures on 31st March 2017.

Posted by tricitynews online at 03:59