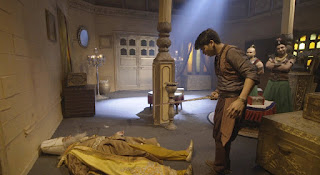 By Tricitynews
Chandigarh 21st May:- Aladdin from Aladdin-Naam Toh Suna Hoga on Sony SAB is all set to shock viewers with a series of chilling encounters in the upcoming episodes. Aladdin (Siddharth Nigam) who has always been on the hunt to find Mucchad and punish him for destroying his family and Baghdad, has finally learnt of Mucchad’s real identity. While entering the secret room to rescue Ginoo, Aladdin witnesses the King in Mucchad’s avatar. On the other hand, Zafar (Amir Dalvi) with wicked intentions in mind, has revealed Aladdin’s identity as the Kala Chor of Baghdad to the King.
After failing in his attempt to convince Yasmine about her father’s truth, Aladdin accuses the King for being the destroyer of his family and the nation   in front of the entire royal court and to everyone’s surprise the King admits to it as well. In a heated confrontation between Aladdin and the King, Aladdin is caught in an illusion created by the now evil Genie of the Lamp (aka Ginoo) and stabs the King with his sword.
Sony SAB’s fantasy tale, Aladdin–Naam Toh Suna Hoga, which is known for its gripping storytelling is about to bring the most scandalous and shocking turn of the story so far with this turn of events! Now, the real question is, has Aladdin really killed the King? And why is Ginoo involved in this?
Siddharth Nigam, essaying the role of Aladdin said that the story is going through an intense plot twist. There are huge revelations coming up. This is the toughest time for Aladdin as he has finally found the man responsible for ruining his family. The situation is tense and our viewers should brace themselves for the upcoming episodes. He’d like to thank our viewers for the consistent support and love they have given us so far and we want to keep working towards entertaining you with our show.

Posted by tricitynews online at 05:03