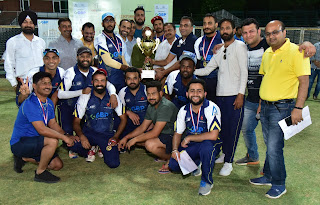 By Tricitynews
Chandigarh 17th June:- The Grand Finale of CII-Yi Corporate Premier League concluded in high spirits with energetic performances by the corporate players. The tournament had set an example for the new generation professionals that both their work and their physical fitness can go hand in hand.
Tejdeep Singh Saini, Director–Sports, Chandigarh Administration said that Corporate Professionals should engage in Sports more frequently” while congratulating the participants. He appreciated the initiative by CII-Yi and expressed that he would like to see more such sports activities in the near future. Sushil Kapoor, Spokesperson, Punjab Cricket Association, Mohali was also present during the match and encouraged the teams to showcase the best of their talents.
The tournament started in May 2019 and saw its last leg with the grand victory of CII-Yi in a day-night match at Sector 16 Cricket Stadium. The team defeated TT Consultants by 5 wickets who gave them a tough competition by setting a goal of 133 runs. Team CII-Yi ended with a total of 135 runs in just 18.1 overs.
Team TT Consultants won the toss and decided to bat first and made a total of 132 runs in 20 overs. Mohan from its team amazed the audience with his performance that included five 4s and four 6s with a total of 59 runs in just 45 balls.
Sushil Chaudary from Team CII-Yi added to his team’s victory by scoring a marvelous total of 47 runs in just 29 balls and was awarded Man of the Match and Best All-Rounder of the Series. Rahul Kad from Team Federal Mogul was chosen the Best Batsman of the Series owing to his scintillating performance. Vishek from TT Consultants was awarded the Best Bowler of the Series.
The tournament ended with a Closing Ceremony in which the best of the Sports talent was awarded amongst an enthusiastic crowd of local fans.

Posted by tricitynews online at 05:35